“This view is…poisonous and medieval. Creationists reject not just evolution but most of the Enlightenment and pretty much all intellectual development since. Rather than celebrate the brilliance of the human mind, they disparage free thought as dangerous and sinful. Instead of extolling the virtues of creativity and imagination, they malign all unorthodox ideas as immoral and wicked. For all creationists’ insistence that evolution denigrates humanity, creationism is fundamentally anti-human, commanding us to spurn our own logic and cognition in favor of absurd sophism derived from a 3,000-year-old text. It turns our greatest ability – to reason – into our greatest enemy. Using our brains, according to creationism, will lead us to sin; only mindless piety can keep us on the track to salvation.”

The verdict is in. Bill Nye handily beat Ken Ham last night at the debate. And, he did it in Ken’s own territory – in an ode to ignorance known as the Creation Museum.

Many in the atheist community were concerned about how things would go given the environment and other factors.  There was concern that Mr. Nye would be making Ken Ham and his creation model look more legitimate. I think a fair assessment of the debate would conclude that Bill’s presentation of science and facts were more compelling than Ken’s silly seven “Cs” of creation or his bizarre reasoning or his lack of honest answers. In the end, science education in America is the winner. Bill Nye understands that we have to take this debate to the street. The voters need to understand what is at stake. Ken Ham’s effort to undermine science education in Kentucky and in the rest of country deserves a counter-effort. We need pro-science advocates such as Bill Nye taking this fight to the people.

Its seems silly now that we doubted Bill Nye the Science Guy’s ability to handle this debate. There really is no comparison. Using his friendly charisma and plenty of his charateristicly plain spoken science facts, my guess is that Bill Nye entertained and informed even the the mostly creationist audience. As for Ken Ham, any time he started to speak most of the atheists that I watched it with were probably thinking “I’ve heard this ridiculous and tired argument a hundred times before.” Ken’s slides were dense with creationist clip art. It was all pretty slick – high definition and lots of multimedia. But you know, there is no amount of polish or technology that can make up for the total lack of compelling arguments and facts in Ken Ham’s lame presentation.

It seems that this debate may have been an attempt to get attention in order to raise funds for the failing Ark Encounters endeavor. I doubt it will make much difference in helping Ham and his buddies raise the remaining millions needed to make his Arky Arky in Kentucky.

During the debate there were a few jokes that seemed to fall flat (as evidenced by limited chuckles or only a patter of polite applause),  I wonder which one of the jokes drove this mixed reaction?

22 Messages From Creationists To People Who Believe In Evolution

“I asked 22 self-identifying creationists at the Bill Nye/Ken Ham debate to write a message/question/note to the other side. Here’s what they wrote.”

“Put simply, it seems to be fundamentally human to seek narratives, find patterns and create rituals to include others in the meanings we make. If we want a more secular society – and we most certainly do – there is nothing wrong with making it look and feel good.” 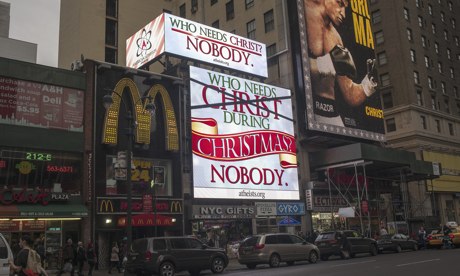