The FD book club selection for November is Dragons of Eden: Speculations on the Evolution of Human Intelligence by Carl Sagan. FD members will be meeting to discuss the book on 23 November.

Here’s a summary of the book from Wikipedia:

“The Dragons of Eden: Speculations on the Evolution of Human Intelligence is a Pulitzer Prize winning 1977 book by Carl Sagan. In it, he combines the fields of anthropology, evolutionary biology, psychology, and computer science to give a perspective of how human intelligence evolved.
One of the main issues featured in the book is the search for a quantitative way of measuring intelligence. Sagan shows that the brain to body mass ratio is an extremely good indicator, with humans having the highest and dolphins second. It does break down, however, at the extremely small end of the scale. Smaller creatures (ants in particular) place disproportionally high on the list.
Other topics mentioned include the evolution of the brain (with emphasis on the function of the neocortex in humans), the evolutionary purpose of sleep and dreams, demonstration of sign language abilities by chimps and the purpose of mankind’s innate fears and myths. The title “The Dragons of Eden” refers to man’s early struggle for survival in the face of predators, and how fear of reptiles may have led to cultural beliefs and myths about dragons and snakes.”

In the book, Sagan asks this – “after we returned to the savannahs and abandoned the trees, did we long for those great graceful leaps and ecstatic moments of weightlessness in the shafts of sunlight of the forest roof?”

“In a victory for science education and the children of Texas, publishers are refusing to include creationism in science textbooks despite fierce pressure from conservative Christians.

The Texas Freedom Network, a nonpartisan watchdog, released a statement Thursday, Oct. 17, declaring “All 14 publishers are refusing to water down or compromise instruction on evolution and climate change in their proposed new high school biology textbooks.”

The following is from a press release issued by the Texas Freedom Network announcing the news:

Materials submitted to the Texas Education Agency and examined by the Texas Freedom Network and university scientists show that publishers are resisting pressure to undermine instruction on evolution in their proposed new high school biology textbooks for public schools.” 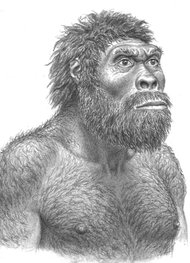 “After eight years spent studying a 1.8-million-year-old skull uncovered in the republic of Georgia, scientists have made a discovery that may rewrite the evolutionary history of our human genus Homo.

It would be a simpler story with fewer ancestral species. Early, diverse fossils — those currently recognized as coming from distinct species like Homo habilis, Homo erectus and others — may actually represent variation among members of a single, evolving lineage.” – Read more.